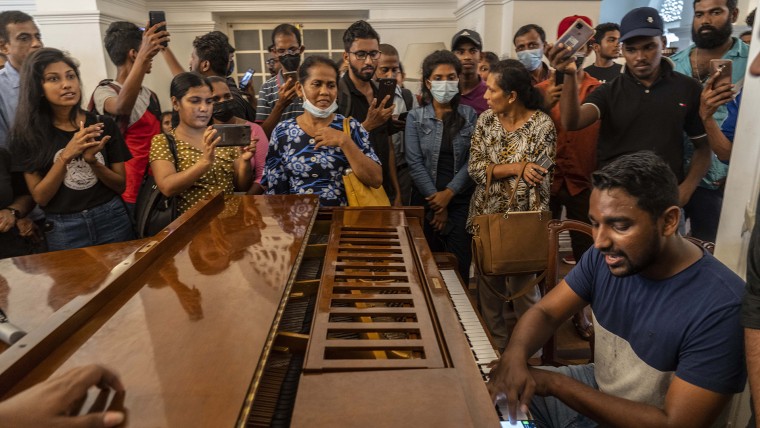 Sri Lankan President Gotabaya Rajapaksa and his entire cabinet must resign this week, with outrage over the country’s economic crisis and protesters literally on their doorstep.

On Saturday, tens of thousands of protesters seized buildings in the Sri Lankan capital, including the official residence of Rajapaksa and Prime Minister Ranil Wickremesinghe, in the biggest day of protests that have intensified in months. Photos and videos of hundreds of protesters taking smiling selfies, playing in a pool and singing, dancing and waving the national flag in opulent halls only underlined the magnitude of the changes taking place in the South Asian island nation .

The Prime Minister’s Office, in a statement on Monday, confirmed Rajapaksa’s decision to step down this week, although he has not made any direct public statement himself.

Rising inflation and public debt have left the nation of 22 million with shortages of food, medicine and fuel, and citizens have taken to the streets to demand accountability. Many blame Rajapaksa and his family, who have dominated Sri Lankan politics for years, for mismanaging the country’s finances and contributing to the crisis.

Reuters reported that Rajapaksa was not at the facility, having been evacuated on Friday as a security measure ahead of planned protests, according to two defense ministry sources.

Home to the Rajapaksa family political dynasty for most of the past two decades, the colonial-era presidential palace quickly fell into citizen hands.

Shortly after gaining control of the residence, protesters were photographed dancing and celebrating, with many wearing the Sri Lankan flag.

The next target was the nearby private residence of Wickremesinghe, who has only been prime minister since Rajapaksa’s brother resigned in May. The farm was set on fire by the protesters after a confrontation with the police.

That day, the office of the Speaker of Parliament announced that Rajapaksa would resign in a video statement. Wickremesinghe’s office also indicated his willingness to step down.