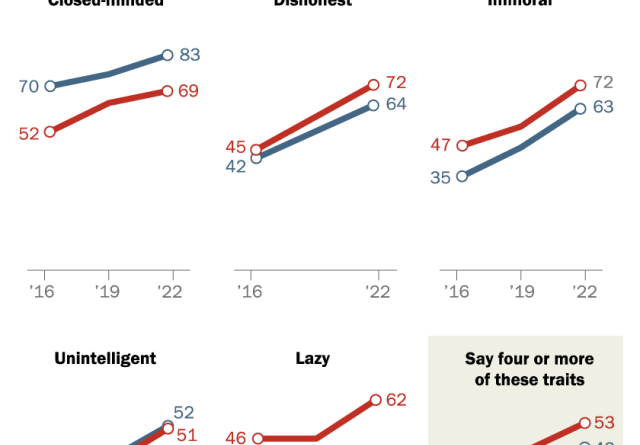 The Trump era has been intensely polarized in a country that was already seeing its social fabric stretched.

A a big Pew poll this week shows how bad it has gotten. (Pew interviewed 6,174 Americans. For context: most good national polls only interview about 1,000 people.)

Since 2016, a growing number of people in each party simply don’t like people in the other party. They increasingly see people with different political views as closed-minded, dishonest, unintelligent and even immoral.

Most Democrats, Republicans and independents who lean toward either party say they do so because of the harm the other party could do to the country.

Americans are also increasingly negative in their view of the two major US political parties, with 27% saying they have an unfavorable view of both political parties. Pew has been asking this question since at least 1994. 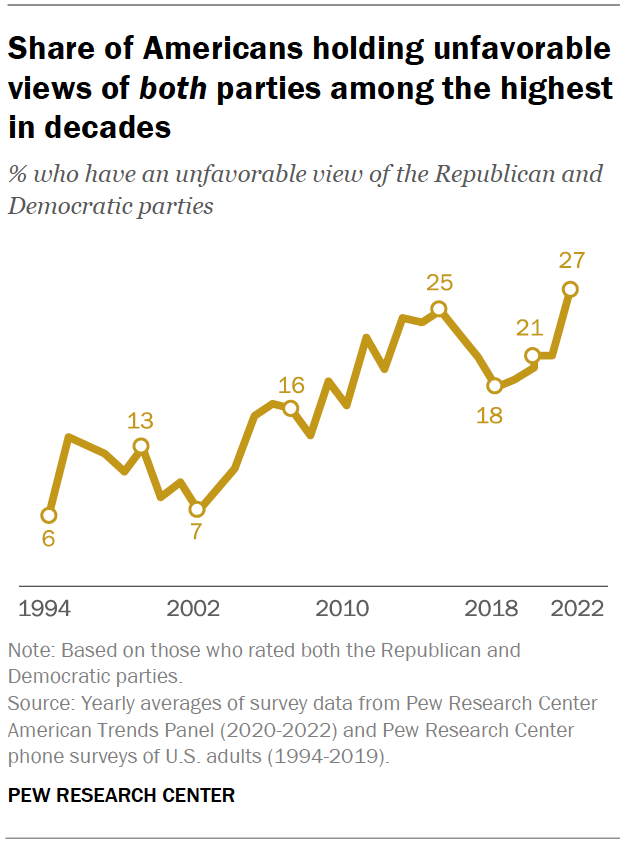 more and more Americans don’t want to get married either or dating people from another political party. A 2020 survey found that almost 4 out of 10 people in both political parties they would be upset if their child married someone from the opposite political party.

(There is even an app for conservatives now to avoid liberals in dating.)

About 7 in 10 people say they often wish there were more political parties to choose from. Democrats are more likely to say this than Republicans, which could explain some of the more public fights among Democrats, but the sentiment is especially high among independents and those who are younger and less politically engaged.

While these figures seem to offer an opening to a third medium, the problem is that there is no medium of ideological magic in this country.

A Pew typology found that Americans fall into nine narrow ideological categories. But how we wrote when the study was published in 2021:

“… the three groups with the most self-identified pro-independence ‘have very little in common politically'”.

One group, the “ambivalent right,” as Pew called it, is conservative on economic and racial issues and wants smaller government; The “Stressed Sideliners” are more economically liberal but socially conservative; and those in the “Left Out” category are very liberal on race, immigration and climate policy.