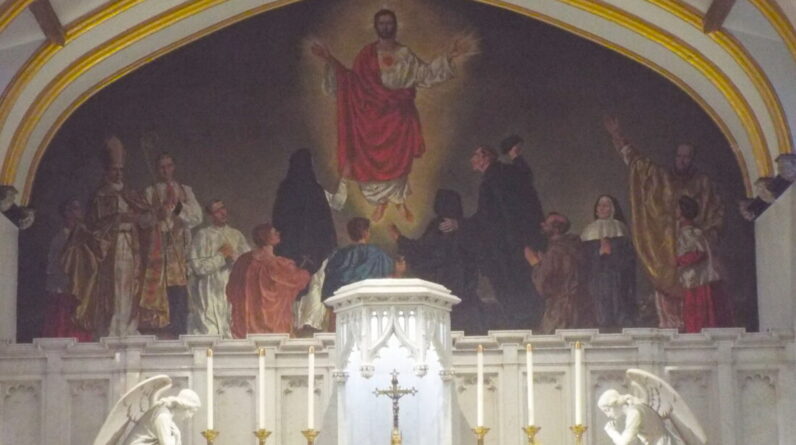 Sentinel photo by JOSH YODER
A statue of Jesus Christ is shown outside Sacred Heart Catholic Parish in Lewistown.

LEWISTOWN – Like other Christians, Catholics believe in the divinity of Jesus Christ. They follow his teachings as set forth in the New Testament and trust in God’s promise of eternal life.

But religion is full of misconceptions.

The first misconception Rettig addressed was that Catholics worship idols. Many people see statues of Saints, the Virgin Mary, both inside and outside Catholic buildings around the world. Rettig explained that the statues are simply a reminder of the history of the Catholic faith and they all mean the same thing: belief in Jesus Christ.

“Catholics worship only God, whom we believe to be three persons: the Father, the Son, and the Holy Spirit.” Rettig said. “A Catholic praying in front of a statue may seem like idolatry, but we simply use statues of saints to remind us of theological beliefs. In other words, for example, we have images of our deceased loved ones in our homes to remember them and admire them. But, nevertheless, we do not worship them.”

“In the same way, we admire and remember the members of our spiritual family throughout 2,000 years of church history.” Rettig continued. “Furthermore, statues of saints or Jesus became a long-standing tradition of the Catholic Church because the masses of people in early Christian history were illiterate and could not read the Bible, so we represented the beliefs religious through images”.

The second misconception of the Catholic faith that many people believe is that many Catholics are swimming in money. Rettig says that’s simply not true. In fact, Catholics believe that they should see money as a resource meant to be shared with others and detach themselves from excessive desires for personal wealth.

“The Catholic Church may be the largest Christian denomination in the world and compared to others, we could have more, but we are not rich.” Rettig said. “On a parish scale, the majority of parish finances go to the maintenance of the parish. But a large part goes to charity. For example, Catholic Charities is the largest charity in the world.”

“In addition, the St. Vincent DePaul Society of Lewistown provides more than $40,000 annually in charitable giving,” Rettig continued. “Globally, the Vatican is rich in historic assets, handed down over the centuries, such as works of art and religious vessels, but the Vatican bank is certainly not bursting at the seams.”

The Catholic Church is a cult

The last misconception is that the Catholic Church is a cult that worships Mary. Many Catholics treat Mary with respect because she is the one who gave birth to the Lord and Savior, Jesus Christ.

“If you google the definition of”cult“, it reads,”a system of religious veneration and devotion directed towards a certain object figure.“In making this definition, we will not worship a figure or an object, as was previously clarified in our rejection of idle worship, but we will worship the person of Mary.” Rettig said. “And, to revere” is defined as, “to look with great respect, to revere.“. Veneration is not the same as worship. Worship is “worship of a deity,” and in no way do we see Mary as a divinity. We simply worship, regard, and respect her as the theotokos, which is the early Christian word for “god bearer,“who carried Jesus Christ, our Lord and Savior, in her womb.”

“We adopt this veneration of the first Christian writers, such as Ignatius of Antioch, disciple of the apostle John, bishop of Antioch, who was martyred for the Faith in AD 108.” Rettig continued. “Among many other things written about Mary, he writes:”the virginity of Mary, her birth and the death of the Lord are three mysteries that must be proclaimed aloud.Other early Christian writers emphasized the veneration of Mary, including Clement of Rome (99 AD), Polycarp (155 AD), Justin Martyr (165 AD), and Irenaeus (202 AD). This is where Catholics venerate, not worship, Mary. comes from.”