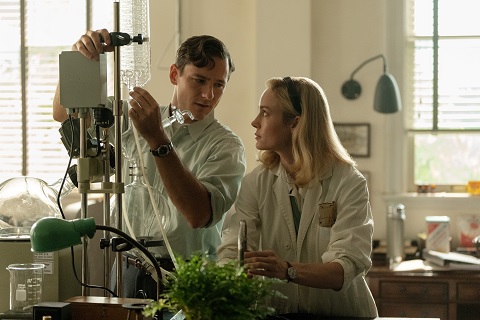 Apple TV+ today debuted a first look at “Lessons in Chemistry” and announced that the new Apple Studios drama series starring and executive produced by Academy Award winner Brie Larson (“Captain Marvel” , “Room”). Based on the best-selling debut novel by author, science editor and copywriter Bonnie Garmus, “Lessons in Chemistry” will make its world debut on Apple TV+ in 2023.

Starring alongside Larson and rounding out the cast of the highly anticipated drama:

· Aja Naomi King (“Getting Away With Murder,” “Sylvie’s Love,” “The Upside,” The Birth of a Nation”) as “Harriet Slone”

· Stephanie Koenig (“The Flight Attendant,” “The Offer”) as “Fran Frask”

· Thomas Mann (“Winning Time: The Rise of the Lakers Dynasty,” “Me and Earl and the Dying Girl”) as “Boryweitz”

Set in the early 1950s, “Lessons in Chemistry” follows Elizabeth Zott (played by Larson), whose dream of becoming a scientist is put on hold in a society that considers women to belong in the domestic sphere, not to the professional When Elizabeth finds herself pregnant, alone, and fired from her lab, she musters the resourcefulness that only a single mother can. She accepts a job as a presenter on a TV cooking show and sets out to teach a nation of ignored housewives – and the men who suddenly listen to her – much more than recipes… while wishing to return to her true self love : science

The series will premiere alongside a growing slate of films and series from Apple Studios, including the recently released new psychological thriller “Surface,” starring Gugu Mbatha-Raw; “Mrs. American Pie,” an upcoming Apple Original from creator Abe Sylvia starring Kristen Wiig; “High Desert,” a new comedy starring Patricia Arquette and directed by Ben Stiller; “City on Fire,” inspired by the acclaimed novel of the same name, and written and produced by Josh Schwartz and Stephanie Savage; “The Changeling,” a new drama series with LaKeith Stanfield attached to star and executive produce; Martin Scorsese and Leonardo DiCaprio’s highly anticipated film ‘Killers of the Flower Moon’ and more.

Apple TV+ offers premium and engaging drama and comedy series, feature films, innovative documentaries and kids and family entertainment, and is available to watch on all your favorite screens. After launching on November 1, 2019, Apple TV+ became the first all-original streaming service to launch worldwide and has premiered more original hits and received more award recognition faster than any other other streaming service in its debut. To date, Apple Original films, documentaries and series have earned 250 wins and 1,123 award nominations.

Apple TV+ is available in the Apple TV app in more than 100 countries and regions, on more than a billion screens, including iPhone, iPad, Apple TV, Mac, popular smart TVs from Samsung, LG, Sony, VIZIO, TCL and others, Roku and Amazon Fire TV devices, Chromecast with Google TV, PlayStation and Xbox game consoles and at tv.apple.com for $4.99 per month with a seven-day free trial. For a limited time, customers who purchase and activate a new iPhone, iPad, Apple TV, Mac or iPod touch can enjoy three months of Apple TV+ for free.