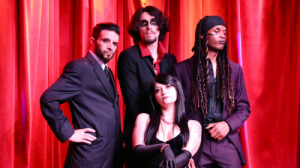 Vicki’s Dream is shown here at the Red Light Cafe in Atlanta, GA

We are honored to participate in this contest and to have so many people supporting us through it. This is our dream and we are very happy to be able to achieve our goals while supporting a good cause.”

LILBURN, GEORGIA, UNITED STATES, August 18, 2022 /EINPresswire.com/–
Emerging from Atlanta’s underground music scene, Vicki’s dream has become a growing force in a contest organized by The Opening act and sponsored by a music app company called Audacy. The band is currently ranked 1st in the group finals of the competition and needs your help to advance further in the rounds to win the competition.

The winner of the contest will perform live at the “We Can Survive Concert” at The Hollywood Bowl in Los Angeles, California and take home $10,000. You can vote daily once every 24 hours for the band for free. The competition has also been made for the benefit of the American Foundation for Suicide Prevention. Voting donations can be made when you click “Vote Together” and all proceeds will go to the foundation and help support a good cause.

“We have seen the aftermath of suicide and it is beyond devastating. Our love and prayers go out to anyone grieving the loss of a loved one, and we strongly encourage people to reach out to someone if they are going through something that they can’t. take on alone,” said Vicki’s Dream. They went on to say: “We are honored to be taking part in this competition and to have so many people supporting us through it. This is our dream, and we are very happy to be able to achieve our goals while supporting a good cause. . This is very important to us as it would open up so many opportunities for us, and we want people to care as much as we do about music and fighting the good fight against suicide. We love being musicians because we are able to express – us and spread positive messages through our music. It gives us the opportunity and the privilege to be able to perform live and provide an escape from reality for our listeners, and people need that.”

Beginning in October 2017, the two worlds of shadow and light collided in a catastrophic collision, thus creating Vicki’s Dream. The inventors and narrators of the Vicki’s Dream soundtrack and world story started with Toxic Thomas followed by Brince, Crow and Fantazma.

The four creative minds of this motley group joined several different musical genres as they developed their own blend of punk, goth and metal tones, which became the musical forefront of their driving “post-apocalyptic” sound. Vicki’s Dream is here to break down the walls of reality as she dives deep into the human condition and invites the listener on a quest to witness the beauty and chaos found in the darkness and embrace the light within. every day.

But who is Vicki, you ask? Vicki is the main character of our story. She is a strong young woman who has fallen into a deep sleep and awakened to a post-apocalyptic world of our beloved earth left in destruction and chaos. It’s up to her to prevent that from happening and restore everything to perfect balance. Vicki represents a beacon of power and hope for all in her quest to save the earth and humanity from evil demonic forces working in concert with a tyrannical terrorist organization. Our songs represent their dreams and experiences. Fasten your seat belts for an epic musical journey because the boat is going down the river and there’s no telling how far the river will go.

Fans of Vicki’s Dream have described their sound as The B-52s, The Misfits and Blondie with ties to The Go-Go’s. His main influences come from artists and bands such as The Misfits, Siouxsie Sue, Peter Murphy, The Plasmatics, Prince, A Perfect Circle, Faith No More, Dead Kennedys, Sonic Youth and more. They have had the honor of opening for notable celebrity acts such as Wednesday the 13th and Psyclon Nine. They are currently working on an album and plan to release it sometime this year. They say winning the $10,000 from the contest would go towards the band’s essential needs, such as their album expenses, merchandising and equipment, so they can continue to develop and improve their sound and provide a tangible and captivating experience for their fans .


EIN Presswire’s priority is source transparency. We don’t allow opaque clients, and our editors try to be careful to remove fake and misleading content. As a user, if you see something we’ve missed, please let us know. Your help is welcome. EIN Presswire, Everyone’s Internet News Presswire™, tries to define some of the limits that are reasonable in today’s world. See our editorial guidelines for more information.