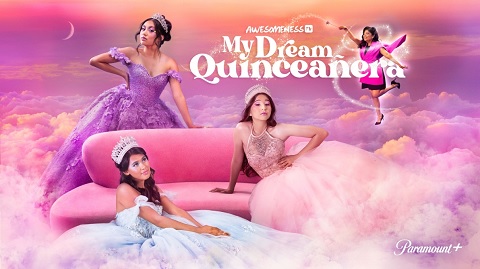 “MY DREAM QUINCEAÑERA” HAS BEEN REIMAGINED AS A NEW SERIES AIRING ON PARAMOUNT+ SEPT. 16

Series produced by Awesomeness and based on the original “My Dream Quinceañera”, AwesomenessTV’s most viewed YouTube series of all time

August 23, 2022 – Coming-of-age reality series MY DREAM QUINCEAÑERA, based on AwesomenessTV’s most-watched YouTube series of the same name, will premiere this fall as a new reimagined series on Paramount+. Produced by Awesomeness, the 10-episode season is executive produced by Teresa Hsu (“Project Runway”). The first three episodes will be available on Friday, September 16, followed by a weekly release of the remaining seven episodes of the season.

MY DREAM QUINCEAÑERA follows three Southern California teenagers – Bayle Delgado, Romi Herrada and Angelica Luna – who go on simultaneously fun and drama-filled trips to celebrate the coming-of-age birthday parties of their dreams. New to the Paramount+ series, the three ladies will have the added help of expert quinceañera planner Maria Pérez to help make all their quinceanera wishes come true.

Along with the new series, AwesomenessTV will also premiere a special short episode, “My Dream Quinceañera: Never Too Late,” which will follow the story of a trans woman, Juliet, who never had the chance to celebrate a quinceañera in the 15 years and finally gets to experience his quince later in life as his true self. The episode will air on TikTok, YouTube, Snap, Instagram and Facebook.

Prior to its Paramount+ revival, MY DREAM QUINCEAÑERA was born as an AwesomenessTV YouTube series that spanned 39 seasons and over 230 episodes, making it the longest-running and most-watched AwesomenessTV original series of all time.

Paramount+, a digital subscription video-on-demand and direct-to-consumer live streaming service, combines live sports, breaking news and a mountain of entertainment. The premium streaming service features an extensive library of original series, hit shows and popular movies across all genres from world-renowned brands and production studios including BET, CBS, Comedy Central, MTV, Nickelodeon, Paramount Pictures and Smithsonian Channel. The service is also home to unmatched sports programming, including all CBS Sports events from golf to football, basketball and more, plus exclusive streaming rights to major sports properties, including some of the biggest and most popular soccer leagues in the world. Paramount+ also allows subscribers to stream local CBS stations across the U.S., plus the ability to stream the CBS News Network for 24/7 news and CBS Headquarters Sports for sports news and analysis.

For more information about Paramount+, visit www.paramountplus.com and follow @ParamountPlus on social platforms.

Founded in 2012, Awesomeness is a media company focused on serving the global Gen Z audience through its digital publishing, film and television studio divisions. Genius has become the destination of youth culture, cultivating a loyal following with award-winning programming on the world’s biggest streaming services, including Netflix (hit movie series ‘To All The Boys I’ ve Loved Before,” Emmy(R) winner”). Trinkets”) and Hulu (Emmy(R) winner “Zac & Mia,” Emmy(R) nominee “Pen15”), together with the company’s wildly popular short-form shows on YouTube (“Next Influencer,” Twin My Heart,” “Noah Beck Tries Things,” “My Dream Quinceañera”), which garner hundreds of millions of views. As a brand of leading media, Awesomeness’ global distribution footprint spans proprietary, social and premium SVOD platforms.Awesomeness is part of Paramount’s (Nasdaq: PARA, PARAA) global portfolio of multimedia entertainment brands and headquartered in Los Angeles with additional offices in New York.