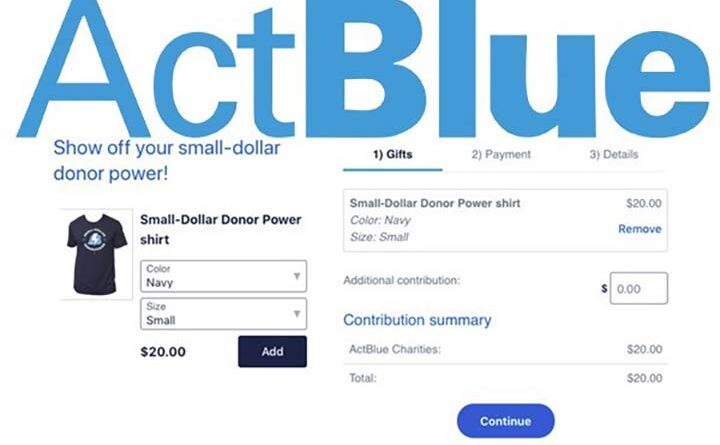 Political merchandise is getting an on-demand upgrade.

“Merch has always been a problem for campaigns, especially medium and small ones,” said Darcy Burner, CEO of Buttonsmith. “Campaigns have had to buy and stock merchandise on their own, so many campaigns simply don’t offer it.”

MerchBlue allows campaigns to design multiple merchandising products and add them to their ActBlue page. Once a follower has purchased merchandise online, the order is sent to MerchBlue for Buttonsmith to make and fulfill on demand.

“Because we do all production and fulfillment on demand, there is no upfront cost for campaigns and much less hassle,” Burner added.

MerchBlue is currently available in beta, with some active campaigns and organizations able to sign up for early access to the platform. According to the website, the platform currently offers custom T-shirts and buttons, but hopes to add hoodies, signs, bumper stickers and other merchandise categories in the near future.

On-demand printing and fulfillment has been a growing category in recent years, with digital printing technology enabling retailers and decorators to offer unique, affordable production on the back of easy-to-use e-commerce storefronts. During the pandemic, growth in the print-on-demand space accelerated.

Buttonsmith has been offering on-demand production for several years, developing a suite of proprietary software applications that assist with order management, product configuration, listing development and digital product photography. All of this allows the company to “manufacture goods in less than three working minutes,” according to its website.

The idea for Buttonsmith was born in 2013 when company founder Henry Burner was in fourth grade, working on a class project about commerce.

Instead of going the expected route of baked goods, Henry chose to make pinback buttons to sell to his classmates. In the summer, he sold the pine nuts at local farmers markets, and by 2014, he had moved sales online. Finally, Buttonsmith added magnets, lanyards, fixed top badge reels and their patented Tinker Reel badge reels with interchangeable caps. In 2015, the company completed a successful Kickstarter campaign for its Tinker Reel badges and moved to a manufacturing facility in Carnation, WA.

Buttonsmith runs a 100% union shop affiliated with the International Union of Painters and Poster Trades (IUPAT), part of the AFL-CIO. It is also in the process of becoming a certified B Corp.

Get the most important news every day by subscribing to PromoGram.