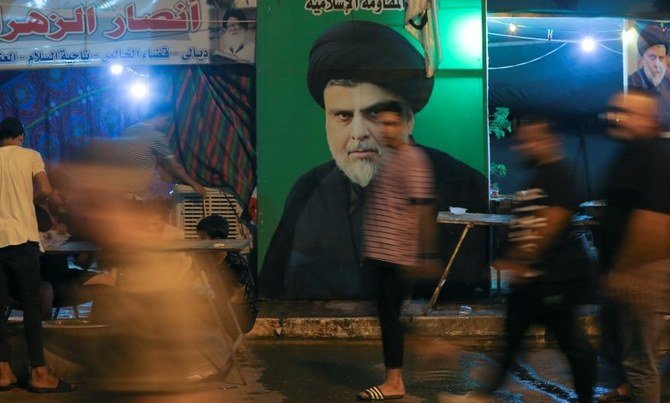 Chaos and violence threaten Iraq due to political deadlock

Supporters of Muqtada Al-Sadr walk past his poster outside the Iraqi parliament, Baghdad, August 6, 2022. (AP Photo)

The leader of the Sadrist movement, Muqtada Al-Sadr, appears adamant about charting a new political road map for Iraq, even if doing so requires him to rely on his broad popular base to lead his supporters who are sitting in and around Iraq. Parliament within the Green Zone.
Media-carried scenes of Sadr supporters dancing and roaming the halls of Parliament showed the fragility of the political and security situation, as well as the fragility of a government unable to control security and enforce the regime law. This despite the efforts of Prime Minister Mustafa Al-Kadhimi, who has made serious efforts to limit the interventions of armed militias in the government and to extend the authority of the state, which faces a very difficult test.
These demonstrations probably directly benefit two parties: the Sadrist movement and Al-Kadhimi.
The Sadrists have demonstrated their undeniable popular power and that any attempt to form a new government that does not have their support, or in which they do not participate, cannot succeed.
Al-Kadhimi is, so far, still an authority and a personality located in the center, who seeks to manage the balance between the conflicting political currents by playing the role of arbitrator. This may increase his chances of securing a new mandate, especially since he has become a regionally respected figure and has the support of several influential countries in the Middle East and the Gulf, while leading the dialogue between Saudi Arabia and Iran and works to consolidate Arab-Iraqi relations and reduce tensions in the region.
Al-Kadhimi has called on all parties to avoid any mutual accusations, indicating that political forces should assume their national responsibilities and sit at the table of national dialogue. In a speech, he urged Sadrist protesters to cooperate with security forces and respect state institutions, while calling on security forces to defend public and private property and official institutions.
This message was received positively by the head of the Iraqi Victory Alliance, Haider Abadi, who tweeted that the Prime Minister’s statement “complies with our initiative and invitations to dialogue to agree on a road map for the resolution of the current crisis”. He also called on all parties “to start serious and honest dialogues in the service of both the people and the state.”
Despite the flexibility shown by some Iraqi leaders in dealing with the crisis, including the head of the Fatah Alliance, Hadi Al-Amiri, Al-Sadr went further in his speech, expressing his reservations about negotiate with the Coordination Framework, saying: “Dialogue with them, according to our previous experiences, has brought nothing to the nation but corruption and dependency.” He noted that “no benefit should be expected from this dialogue, especially after the people have expressed their free speech,” demanding a “peaceful and democratic revolutionary process and early elections after the dissolution of the current parliament.”
Despite the constitutional difficulties, early elections are a step that many forces, which were negatively affected by the results of the last poll, would be willing to accept. But others, such as the Coalition for the Rule of Law, have reservations, reaching the degree of rejection, with its leader, former Prime Minister Nuri Al-Maliki, commenting on Twitter: “Serious dialogue, which we hope will resolve differences and restore things to their rightful place, starting with a return to the constitution and respect for constitutional institutions”.
However, other Iraqi leaders announced their support for new elections. Al-Amiri issued a statement saying his alliance supports holding early elections. He noted that the previous vote was marred by many suspicions and objections. The process needs “a comprehensive national dialogue to determine the date, mechanisms and requirements of the elections, in addition to providing an appropriate environment to hold honest, fair and transparent elections that allow citizens to regain confidence in the political process”. Amiri added.
Abadi also congratulated Al-Sadr’s speech in which he called for new elections. The leader of the Victory Coalition said: “I salute your efforts, as well as the efforts made by all our brothers to avoid bloodshed and achieve reform. I ask everyone to join hands to serve the people, reform the regime and strengthen the constitutional state through a sound and peaceful democratic process.”
The support Al-Sadr has received from such prominent political figures is amplified by popular support, as well as Al-Kadhimi’s desire to limit the authority of pro-Iranian armed militias. All these factors may be in favor of Al-Sadr, but it is a dangerous adventure that can erupt at any time and lead to bloody confrontations between two sides, each with its own weapons, funding and massive support.

Al-Sadr’s desire for early elections is a dangerous venture that could explode at any moment.

Al-Sadr is trying to meet the chaos caused by Al-Maliki with counter-chaos, to consecrate the equation of the struggle for power and the abyss.
The scene of the protesters occupying the parliament is chaotic and illegal. All parties in Iraq violate the law and resort to people power, the use of weapons, or the power to play with organizational regulations to monopolize the government. Unless Iraq’s political leaders break out of the cycle of power struggles, respect the rule of law, and recognize clear constitutional mechanisms, the country will be threatened with further chaos and violence. Chaos and violence are strongly rejected by the Iraqi people and do not serve the interests of the Gulf countries who want a strong and stable system in Iraq that is capable of enforcing security and law.

Hassan Al-Mustafa is a Saudi writer and researcher interested in Islamic movements, the development of religious discourse, and the relationship between the Gulf Cooperation Council states and Iran. Twitter: @Halmustafa

Disclaimer: The views expressed by the writers in this section are their own and do not necessarily reflect the views of Arab News