A few moments ago, Deshaun Watson released the following statement regarding the 11-game suspension and $5 million fine handed down by the NFL.

“I am grateful that the disciplinary process is over and I am very appreciative of the tremendous support I have received during my short time with the Browns organization,” Watson said in his statement. “I apologize once again for the pain this situation has caused. I take responsibility for the decisions I made. My focus going forward is to work to become the best version of myself on and off the field and support my teammates as much as possible while I’m away from the team. I’m excited about what the future holds for me in Cleveland.” 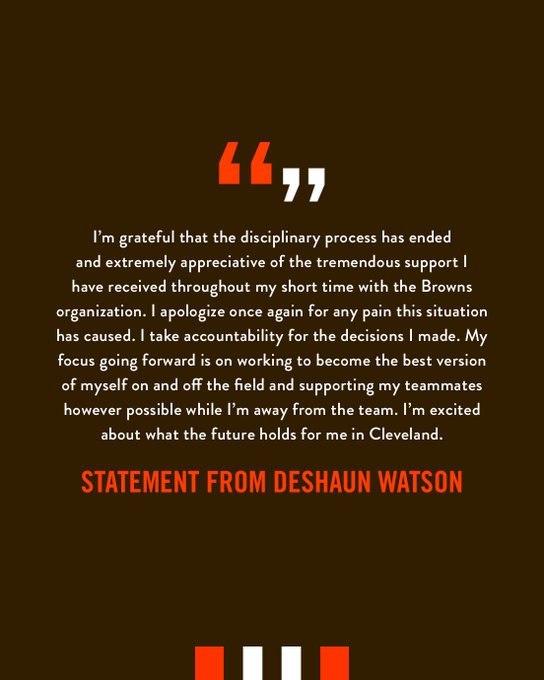 According to multiple reports, the NFL has announced a decision on the matter Cleveland Browns quarterback Deshaun Watson.

NFL writer Joseph Pasteris just tweeted the NFL announcement and Watson will reportedly be suspended for 11 games and fined $5 million. Watson will also be required to undergo a professional evaluation by behavioral experts and follow his treatment program.

Ironically, Deshaun Watson will return to action for a matchup against his former team, the Houston Texans. This game will be played in Houston.

“On Monday, Judge Sue L. Robinson, the independent disciplinary officer appointed jointly by the NFL Players Association and the NFL, issued her decision in the personal conduct matter regarding Deshaun Watson.

Under the 2020 NFL-NFLPA Collective Bargaining Agreement (CBA), the Disciplinary Officer’s findings of fact are binding and non-appealable. Judge Robinson found that Mr. Watson violated the NFL’s personal conduct policy on multiple occasions and was suspended for six games. The CBA grants the NFL or NFLPA the right to appeal discipline imposed by the Disciplinary Officer. This appeal must be presented within three days and will be heard by the commissioner or the person he designates.

The NFL notified the NFLPA that it will appeal Judge Robinson’s disciplinary decision and filed its brief this afternoon. Commissioner Goodell will determine who will hear the appeal.”

Watson, who was dealt to the Browns this offseason after sitting out the 2021 campaign, recently suited up in 2020 in Houston, throwing for 33 touchdowns with seven interceptions while racking up 4,823 passing yards.

Nation, do you think Deshaun Watson’s 11-game suspension and $5 million fine is fair punishment? If not, what should be the punishment?

You have subscribed to our YouTube channel yet? Subscribe and hit that notification bell to stay up to date with all the latest Detroit sports news, rumors, interviews, live streams and more!