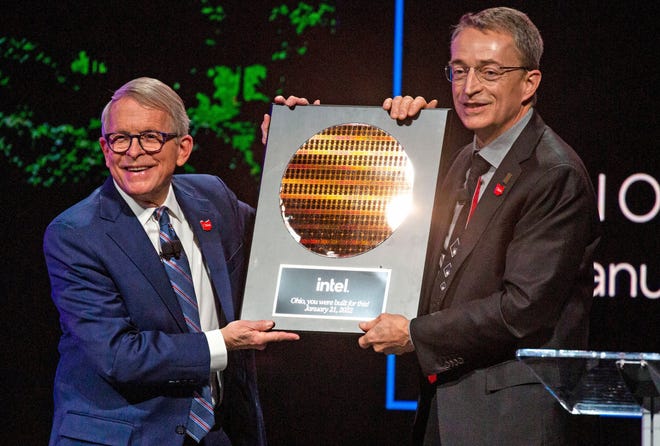 An Ohio Republican is taking another chance to find gun reforms his party will accept. President Joe Biden announced a visit and Lt. Gov. Jon Husted reacted to text messages about his efforts to pass a nuclear bailout.

We break down what it all means on this week’s episode of Ohio Politics Explained.

It’s a podcast from the USA TODAY Ohio Bureau Network where we catch you up on the state’s political news in 15 minutes or less. This week, anchor Anna Staver was joined by reporter Jessie Balmert.

1) The most popular ticket in town

Everyone who is anyone plans to attend a groundbreaking ceremony for Intel’s $20 billion New Albany factories.

Intel chose central Ohio for its computer chip manufacturing facility earlier this year. The company says the two factories will employ 3,000 people who can earn $135,000 a year.

Ohio Sen. Matt Dolan, R-Chagrin Falls, introduced a bill this week that would give judges the authority to remove firearms from people under warrants for mental illness.

“We need to change the conversation around public safety,” Dolan said. “This bill protects Second Amendment rights, but we have people who are unfit to own a gun and have expressed violence.”

It’s the second time the Northeast Ohio Republican has tried to pass a gun reform measure. Dolan brought DeWine’s STRONG legislation to Ohio after the mass shooting in Dayton in 2019. This reform package it received three committee hearings and zero votes.

Dolan said he is optimistic that this new law will be more successful.

DeWine and Husted this week responded to questions about how they were involved in lobbying for two nuclear plants after text messages surfaced showing them advocating for specific details in the legislation.

“There were a lot of people of good will” trying to save these nuclear plants, Husted said. “This is different from what FirstEnergy and Larry Householder are supposed to be doing.”

Federal prosecutors allege that Householder and four other men accepted $60 million in bribes from FirstEnergy in exchange for approving a bailout for those nuclear plants. FirstEnergy has admitted the money was a bribe, as well as a $4.3 million payment, Ohio’s top utility regulator.

The head of the family maintains his innocence and is scheduled to go on trial in January.

4) Appealing to a higher power

“Can they order the Legislature to comply and pass bills with certain requirements and all that? Can they order the Redistricting Commission to meet and make a decision, pass existing legislation based on what they say there should be? ” Huffman said. “Clearly the answer to that is no.”

Listen to “Ohio Politics Explained” on Spotify, Apple, Google Podcasts and TuneIn Radio. The episode is also available by clicking the link in this article.