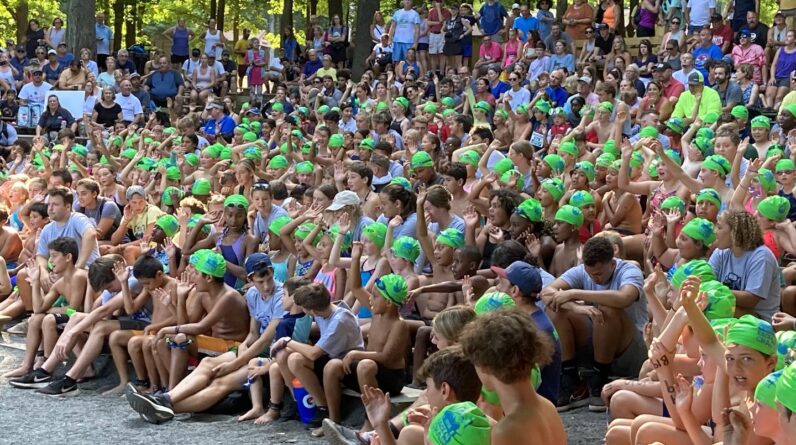 Chase Kowalski was an author.

Full of energy, he would take every opportunity to ride his bike, horse, quad bike, go fishing or work on his swimming, according to his mother, Rebecca Kowalski. He did a triathlon at age 6 and won his age group.

Chase was also a baseball player, a third baseman who wore No. 8 and the fastest kid on his team, his mother said. His coach used to make the kids do extra laps when Chase would lap them in warm-ups.

A decade later, kids still turn up because of Chase, now to honor his memory after Chase was killed during the 2012 Sandy Hook Elementary School shooting.

“His life was cut short, but I think in those seven years he lived longer and did more than most people would ever have the opportunity to do,” said Rebecca Kowalski, a triathlete.

More than 500 children ages 5 to 13 participated in the finals of the ninth annual Race4Chase triathlon honoring Chase Kowalski at YMCA Camp Sloper in Southington on Saturday. In the six weeks leading up to the event, campers from 17 YMCA camps across the state and 12 other states received training on how to be triathletes.

“It’s so fun to see all these little kids cheering on other kids, some of them they don’t know, all to honor my son Chase,” said Rebecca Kowalski.

Hundreds of kids from Connecticut and surrounding states participate in the ninth annual Race4Chase Saturday at Camp Sloper in Southington. (Mike Mavredakis)

Before the triathlon began, the young triathletes crowded into the amphitheater at Camp Sloper, hidden under the shade of the surrounding trees and next to Slopers Pond. They chanted “Race4Chase” and waited patiently as counselors gave instructions and recognized participants from various years. They then went out to compete in different age groups, swimming, cycling and running to the finish line.

“We have a lot of amazing days at Sloper, but this is a special day,” said Justin Hubeny, YMCA Camp Sloper camp director. “The energy, the emotion. For thousands of people to get behind this and do it for Chase Kowalski’s purpose is amazing. I love this day and look forward to it every year.”

Ben Silliman, YMCA Camp Ingersoll camp director and Race4Chase volunteer, said the event represents “what we can do as individuals and as a community.”

Dana Sherwonit, mother of competitor Ayden, said her son is looking forward to the teamwork with the other athletes. “He loves the challenges and being here with all the new friends he meets,” Sherwonit said.

The hardest part was the run, said Greyson Colwell, 6, of Cheshire, but the bike was easy.

Paula Mathews, whose grandson Noah competed on Saturday, said Noah was bursting with excitement when he got in the water to swim. He would jump in and greet them from the water.

Race4Chase is run by CMAK Sandy Hook Memorial Foundation, which is headed by Rebecca and Stephen Kowalski. It is a youth triathlon sanctioned by the USAT, according to the Website of the CMAK Foundation.