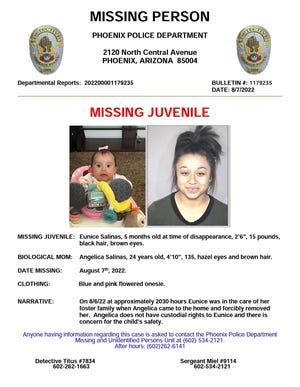 Phoenix police are searching for 5-month-old Eunice Salinas, who they say was taken from her foster family by her birth mother on Saturday.

Around 8:30 p.m., Eunice was in the care of her foster family when her biological mother, identified as 24-year-old Angelica Salinas, arrived at the house and “forced her out,” according to a Phoenix police news release. Angelica Salinas does not have custody of the baby and “there is concern for the child’s safety,” police said.