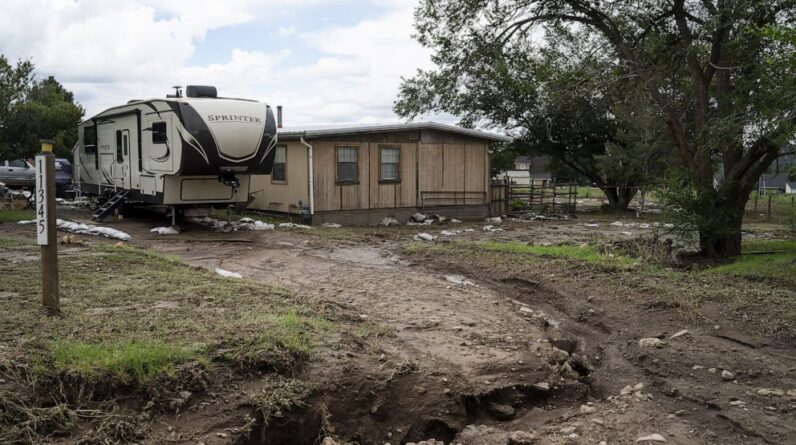 Most of Arizona and New Mexico are under a flood watch through Saturday night, leaving more than 10 million Americans on alert.

Another 1 to 3 inches of rain is possible in parts of Arizona and New Mexico, mostly through Saturday, although some additional rain will still fall on Sunday.

A driveway to a house in the Paintbrush Corridor suffers from erosion after persistent flooding, on August 19, 2022, in Flagstaff, Arizona.

The only way to break an extreme drought is through rain, but when it rains too much, it can quickly become dangerous. For parts of Texas, extreme drought may be met with extreme rain in the coming days.

Much of Texas is expected to have rainy days this week, with most of that rain Sunday through Wednesday. Parts of Texas could get 1 to 10 inches next week.

While Dallas is unlikely to see 10 inches of rain, it’s interesting to note that the city has only received 3.5 inches this summer and only 13 inches this year, putting it at a 10-inch deficit year to date compared to an average year.

The dry soil will act like concrete and if the rains come too fast, flooding will occur. However, if the rain can take its time and allow the surface of the patches to slowly become porous again, it will be very beneficial without the life-threatening flooding.

The National Hurricane Center has given the tropical cyclone in the Gulf of Mexico a 50% chance of becoming a named tropical storm on Saturday. If named, it will be Danielle, the fourth named storm of the season, the first since Colin in early July.

This storm is expected to make landfall in Mexico Saturday evening, just south of Texas, and cause life-threatening flooding in Mexico.

South Texas is expected to receive 1 to 4 inches of rain as far north as Corpus Christi. This can lead to problems with flash, urban and small stream flooding.