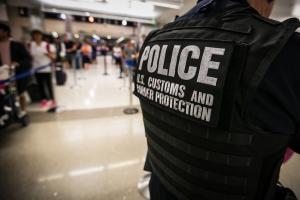 Adrian Salvatore Lewis, 49, accused of killing his wife Shanita Eure-Lewis, 35, was escorted from the airport by Homeland Security Investigations (HSI) special agents and police detectives from Newport News around 4:15 this morning. Newport News Police Department announced the arrest this afternoon.

Newport News police made the announcement Monday Eure-Lewis was missing and asked for the public’s help.

CBP agents assisted in the arrest of Adrian Salvatore Lewis, accused of murdering his wife in Newport News, Virginia. Lewis tried to board a flight to Jamaica.

Customs and Border Protection agents and HSI officers initially encountered Lewis at the departure gate of a flight in Montego Bay, Jamaica, at 10:45 a.m. on Monday. Lewis was wanted for questioning in the disappearance of his wife. CBP and HSI detained Lewis and returned him to the CBP inspection station.

Newport News police detectives arrived around 1:30 p.m. Monday and were told about the contents of Lewis’ luggage.

Lewis refused to speak to detectives without an attorney present.

Criminal charges are just accusations. Defendants are presumed innocent unless proven guilty in a court of law.

On a typical day last year, CBP processed more than 650,000 travelers arriving at our nation’s airports, seaports and land border crossings, and officers and agents arrested an average of 25 wanted criminals each day. See what else CBP has accomplished during a typical day in 2021.

Please visit CBP ports of entry to learn more about how CBP’s Office of Field Operations secures our nation’s borders. Learn more about CBP at www.CBP.gov.