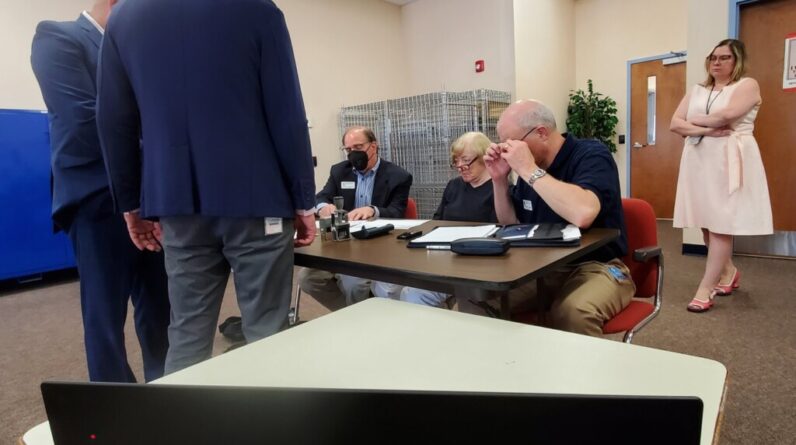 The Montgomery County Board of Elections on Saturday certified the results of the July 19 primary election, with County Executive Marc Elrich leading the Democratic primary for that office by 35 votes over challenger David Blair.

Blair, who narrowly lost the party’s nomination to Elrich four years ago by 77 votes, has indicated he will seek a recount in the close contest.

Your campaign has 72 hours from certification of election to make a formal application.

Saturday’s certification came after county election officials announced around 11 p.m. Thursday that they had found 102 provisional ballots from nine precincts that had not been previously counted.

In a final vote Saturday morning, 101 of those provisional ballots were accepted and the results reported to the State Board of Elections.

The Maryland State Board of Elections will meet Monday to certify statewide election results, although other races remain uncertain.

On Friday in Frederick County, a Circuit Court judge ruled that the challenger in a District 3 County Council race was disqualified from seeking office, days after additional results counted in that race showed a victory a vote

Keegan-Ayer had lodged the challenge at Di Cola’s residence a week earlier.

The Frederick News-Post reported that Judge Julia Martz-Fisher concluded Di Cola was ineligible to run for office under the county’s charter residency requirement after an eight-hour hearing Friday.

Di Cola will have five days to file an appeal in the case.

Meanwhile, the Frederick County Board of Elections will meet at 9 a.m. Tuesday to begin a recount requested by Keegan-Ayer in the District 3 race.

If Di Cola prevails in the recount and the disqualification is upheld, the county’s democratic central committee will be able to choose a replacement to appear on the November general election ballot.