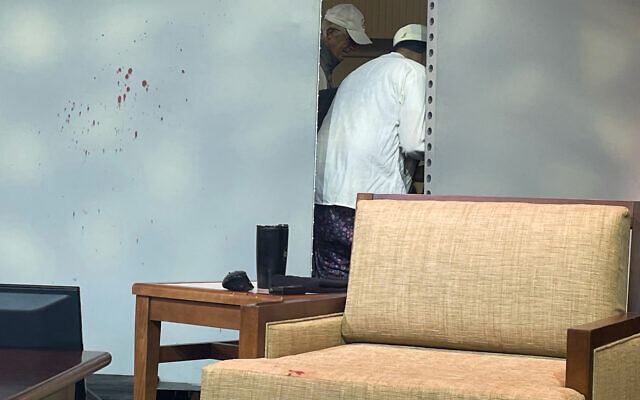 CHAUTAUQUA, N.Y. (AP) – Salman Rushdie, the author whose writing drew death threats from Iran in the 1980s, was attacked and apparently stabbed in the neck Friday by a man who rushed to the stage when he was about to give a lecture in Western New York.

A bleeding Rushdie, 75, was taken to a hospital. His condition was not immediately known. His agent, Andrew Wylie, said the writer was on a ventilator on Friday evening, with a damaged liver, severed nerves in an arm and an eye he was likely to lose.

An Associated Press reporter witnessed a man confront Rushdie on stage at the Chautauqua Institution and punch or stab him 10 to 15 times as he was being introduced. The perpetrator was pushed or fell to the ground, and the man was arrested.

Police identified the attacker as Hadi Matar, 24, of Fairview, New Jersey. He was arrested at the scene and was awaiting arraignment. State Police Maj. Eugene J. Staniszewski said the motive for the stabbing was unclear.

State police said Rushdie was stabbed in the neck. Gov. Kathy Hochul later said he was alive and “getting the care he needs.”

Dr Martin Haskell, a doctor who rushed to help, described Rushdie’s injuries as “serious but recoverable”.

Bloodstains mark a screen as author Salman Rushdie, behind the screen, is treated after being attacked during a lecture, Friday, Aug. 12, 2022, at the Chautauqua Institution in Chautauqua, New York (AP Photo /Joshua Goodman)

Police said a state trooper was assigned to Rushdie’s conference and made the arrest. But after the attack, some visitors to the center questioned why there wasn’t more security for the event, given the decades of threats against Rushdie and a bounty on his head in the Muslim world that offered more than 3 million dollars for anyone who kills him. .

Rabbi Charles Savenor was among the approximately 2,500 people in the audience. Amid gasps, the spectators left the outdoor amphitheater.

The assailant ran onto the platform “and began to beat Mr. Rushdie. At first you’re like, “What’s going on?” And then it was very clear within seconds that he was being hit,” Savenor said. He said the attack lasted about 20 seconds.

Another bystander, Kathleen Jones, said the attacker was dressed in black, wearing a black mask.

“We thought that maybe it was part of a stunt to show that there is still a lot of controversy around this author. But in a few seconds it became clear” that it was not, he said.

Rushdie has been a prominent spokesman for free speech and liberal causes. He is a past president of PEN America, who said he was “reeling from shock and horror” at the attack. 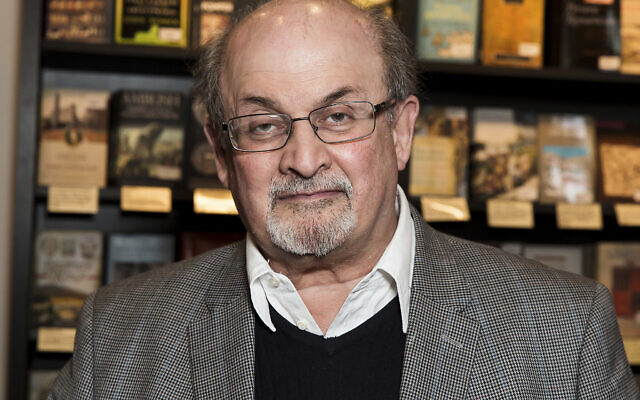 Author Salman Rushdie appears at a signing of his book ‘Home’ in London on June 6, 2017. Rushdie was attacked while giving a lecture in West New York. (Photo by Grant Pollard/Invision/AP, File)

“We cannot think of any comparable incident of a public violent attack against a literary writer on American soil,” CEO Suzanne Nossel said in a statement.

Rushdie “has been the target of his words for decades, but he has never flinched or wavered,” he added.

His 1988 novel “The Satanic Verses” was seen as blasphemous by many Muslims, who saw a character as an insult to the Prophet Muhammad, among other objections. Often violent protests erupted around the world against Rushdie, who was born in India to a Muslim family. A riot killed 12 people in his hometown of Mumbai.

The book was banned in Iran, where the late leader Grand Ayatollah Ruhollah Khomeini issued a 1989 fatwa, or edict, calling for Rushdie’s death. Khomeini died that same year. 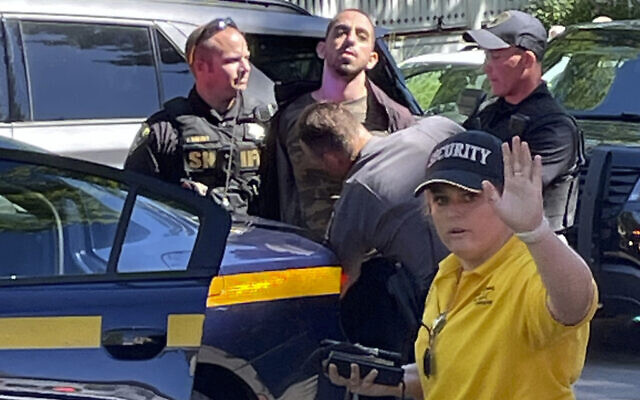 Law enforcement officers arrest a person outside the Chautauqua Institution, Friday, Aug. 12, 2022, in Chautauqua, New York. Salman Rushdie, the author whose writing drew death threats from Iran in the 1980s, was attacked and apparently stabbed in the neck on Friday by a man who rushed the stage as he was about to to give a lecture at the high school in Western New York. (Charles Fox via AP)

Iran’s current supreme leader, Ayatollah Ali Khamenei, has never issued a fatwa of his own to withdraw the edict, although Iran in recent years has not focused on the writer.

Iran’s mission to the United Nations did not immediately respond to a request for comment on Friday’s attack, which prompted a nightly news bulletin on Iranian state television.

The death threats and reward led Rushdie to go into hiding under a British government protection program, which included a 24-hour armed guard. Rushdie emerged from nine years in seclusion and cautiously resumed more public appearances, keeping his criticism open to religious extremism in general. 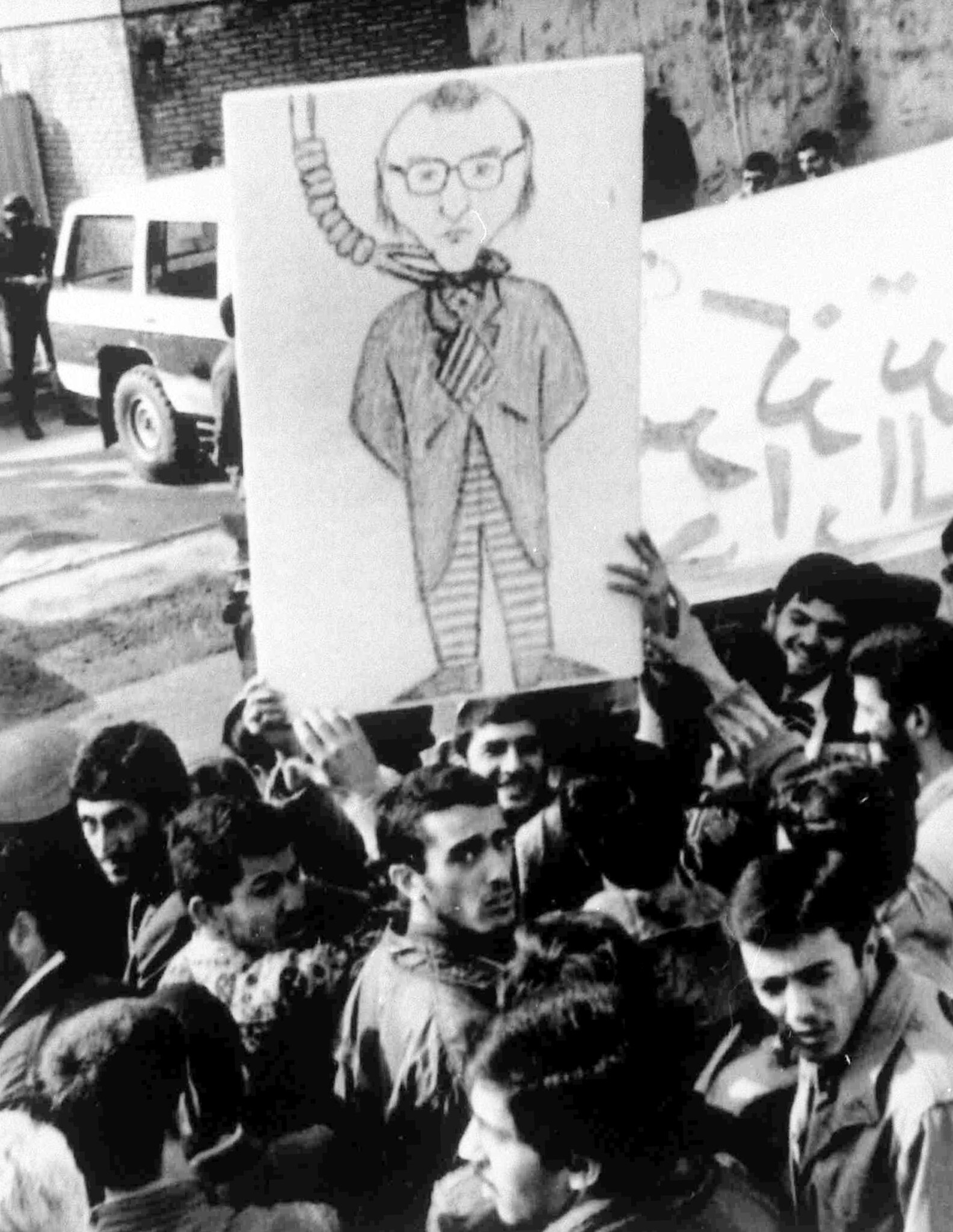 Muslim students display a drawing of Salman Rushdie, author of the book ‘The Satanic Verses’, in front of the former British embassy in Tehran, Iran, on February 18, 1990. (AP Photo)

He said in a 2012 talk in New York that terrorism is really the art of fear.

“The only way to beat it is by choosing not to be afraid,” he said.

Anti-Rushdie sentiment has endured long after Khomeini’s decree. The Censorship Index, an organization that promotes free expression, said money was raised to increase the reward for his murder as recently as 2016.

An Associated Press reporter who went to the Tehran office of the 15 Khordad Foundation, which invested millions to reward Rushdie, found it closed Friday night on the Iranian weekend. No one answered calls to their listed phone number.

In 2012, Rushdie published a memoir, “Joseph Anton,” about the fatwa. The title comes from the pseudonym Rushdie had used while in hiding.

Rushdie rose to prominence with his Booker Prize-winning 1981 novel Midnight’s Children, but his name became known around the world after The Satanic Verses.

Widely regarded as one of Britain’s greatest living writers, Rushdie was knighted by Queen Elizabeth II in 2008 and earlier this year was made a Fellow of the Companions of Honour, a royal award for people who have made a great contribution to the arts. , science or public life. 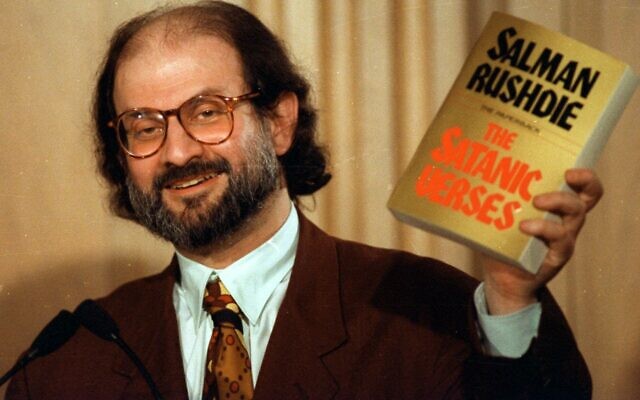 Author Salman Rushdie displays a copy of his controversial book, “The Satanic Verses” during a 1992 press conference in Arlington, Va. (AP Photo/Ron Edmonds)

British Prime Minister Boris Johnson tweeted that he was “horrified” that Rushdie had been stabbed “while exercising a right we should never stop defending”.

The Chautauqua Institution, about 35 miles southwest of Buffalo in a rural corner of New York, has served for more than a century as a place of reflection and spiritual guidance. Visitors do not pass through metal detectors or undergo baggage checks. Most people leave the doors of their centuries-old houses open at night.

The Chautauqua Center is known for its summer lecture series, where Rushdie has spoken before. Speakers cover a different topic each week. Rushdie and Reese were prepared to discuss “the United States as an asylum for writers and other artists in exile and as a home for creative freedom of expression.”