A Pakistani court on Monday barred authorities from arresting former prime minister Imran Khan, who faces terrorism charges after he was accused of threatening police and judicial officials in a weekend speech.

Defense lawyer Babar Awan told reporters in Islamabad that the capital’s high court granted Khan pre-arrest bail until Thursday to allow him to meet procedural requirements before entering his plea against the charges.

Khan’s Pakistan Tehreek-e-Insaf (PTI) party has denounced the terrorism charges as an illegal and politically motivated move by Prime Minister Shehbaz Sharif’s government to silence the opposition, fueling political tensions in the country of 220 million people.

The former prime minister has staged massive anti-government demonstrations across Pakistan, drawing tens of thousands of people since he was ousted from power in a parliamentary no-confidence vote in April to pressure Sharif to call new elections to let the people determine your destiny.

The controversial terrorism charges stemmed from Khan’s speech at a large rally in the Pakistani capital on Saturday, where he vowed to file a lawsuit against senior police officers and a judge over their role in the alleged torture of his detained close aide, Shahbaz Gill .

“We will not spare you,” Khan told the rally. “We will sue you.”

FILE – Supporters of former Pakistani Prime Minister Imran Khan gather outside his home to prevent his arrest on counter-terrorism charges in Islamabad, Pakistan, on August 22, 2022.

Government officials defended the accusations, arguing that “the purpose of the speech was to spread terror among the police and the judiciary and prevent them from doing their duty.”

Khan, 70, could face several years in prison if convicted under Pakistan’s anti-terrorism law. But PTI leaders and supporters have warned that they would march to Islamabad if their party chief is arrested.

“If Imran Khan is arrested… we will occupy Islamabad,” tweeted Ali Amin Gandapur, who was a minister in Khan’s ousted government.

In a televised seminar in Islamabad on Monday, Khan criticized the terrorism charges, saying it was his legal right to approach the higher judiciary seeking justice for Gill, who he said was kidnapped and later tortured in police custody .

“I had called to take legal action against them [police officers and the female judge]Khan said at the televised event. “All these things show that we do not have the rule of law in Pakistan.”

The ex-leader has pointed out that he has 16 cases against him, in addition to the latest case of terrorism, since his removal from office.

Soon after Khan’s speech on Saturday, the Pakistan Electronic Media Regulatory Authority (PEMRA) ordered television channels not to telecast his future speeches live. The regulatory authority, however, allowed Khan’s pre-recorded speeches but alleged that he was “levelling baseless allegations and spreading hate speech”.

Gill was arrested on sedition charges two weeks ago for allegedly making anti-military comments on Pakistan’s most-watched television channel ARY News, which was later taken off air by the government.

The military has ruled Pakistan for about half of its 75-year history through coups against democratically elected governments, and criticism of the powerful institution is seen as a red line.

Gill, 42, was admitted to a government hospital in the capital last week after his health deteriorated in police custody. The assistant professor of business administration at the University of Illinois at Urbana-Champaign is Khan’s chief of staff. Khan and his party alleged that Gill had also been sexually abused. 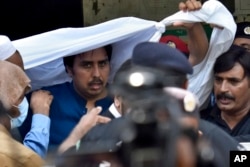 Gill told the court on Monday that he has been stripped several times and tortured since he was arrested on August 9. The judge granted him a “judicial remand” for two more days, which allows police to investigate him further before formal charges are laid.

“Shahbaz Gill is a permanent resident of the United States who has been a member of our faculty for over a decade… We care deeply for his health and well-being, and abhor violence and abuse of any kind ” the university said in a statement posted online. “We call on the government of Pakistan and the international community to ensure that Dr. Gill is treated in accordance with international human rights law.”

“I can confirm with full responsibility as the Home Minister that no torture was inflicted on Gill while he was in police custody,” said Home Minister Rana Sanaullah.

Pakistan introduced anti-terrorism laws in the 1990s to deter sectarian and religiously motivated extremist violence in the country. But successive governments have used the legislation in cases against political opponents and critics to deter dissent.

The Sharif government has also brought terrorism charges against several journalists for reporting in favor of Khan, briefly detaining some and forcing a pair of popular political talk show hosts to flee Pakistan. 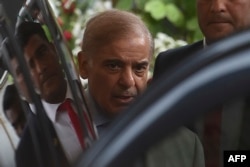 FILE – Pakistan Prime Minister Shehbaz Sharif leaves after meeting with leaders of the Muttahida Qaumi Movement (MQM-P) and cooperation partners of the newly formed government during his visit to Karachi, April 13 of 2022.

On Sunday, Khan addressed a rally in the garrison city of Rawalpindi, next to Islamabad, but internet providers and cable operators blocked his speech. Global internet monitoring organization NetBlocks confirmed that YouTube service in Pakistan was also disrupted as live streams of the speech began appearing on the platform.

Khan is calling for Sharif, who led the no-confidence vote against him, to resign and dismiss the new government as an illegal entity. The ousted Pakistani leader continues to allege that his ouster stemmed from a conspiracy hatched by the United States, allegations Washington rejects.

Khan’s PTI swept last month’s by-election in Punjab, the country’s most populous province, and also won a key by-election in the largest city, Karachi, on Sunday, underscoring its popularity.

Deteriorating political unrest in Pakistan could undermine the Sharif administration’s efforts to address critical economic challenges and secure a long-awaited $1.2 billion payment from the International Monetary Fund, which is to be considered the loan in a council meeting later this month.