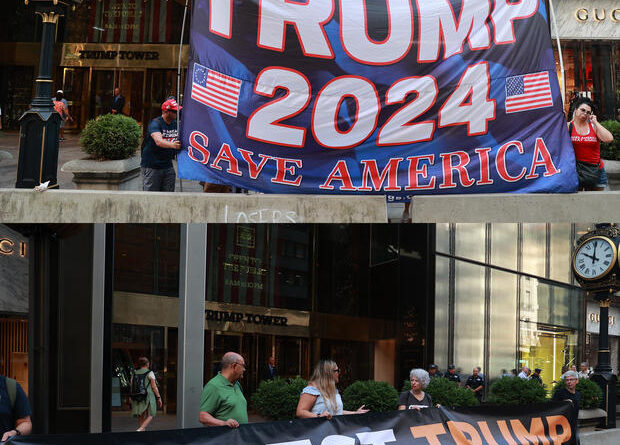 Skies over former President Trump’s Mar-a-Lago home were clear, but a week of legal storm clouds stretched from South Florida to Washington to New York, pushing the U.S. into a heavy political and legal.

For eight hours Monday, few knew that the FBI, armed with a search warrant, was inside Trump’s residence retrieving more than 20 boxes of documents, some containing classified information, from his bedroom, office and storage room According to the Washington Post, some of these records dealt with nuclear weapons.

It was revealed on Saturday that in June a Trump lawyer signed a statement indicating that all papers marked “classified” stored at the former president’s Florida home had been returned to the government. But federal agents found even more labeled classified materials at Mar-a-Lago during their search last Monday.

A search warrant unsealed Friday afternoon revealed that Trump was under possible investigation for violations of the Espionage Act; obstruction; and theft of government documents.

Trump announced that his home was “under siege.” Instantly, fans flocked to the narrow causeway from West Palm Beach to Mar-a-Lago.

One man, standing with a portrait of Trump, told Garrett, “I think he’s going to win in a landslide in 2024.”

Garrett asked, “Partly because of that?”

Dueling protests are held outside Trump Tower in New York City on Tuesday, the day after it emerged that the FBI had served a search warrant and seized boxes of classified documents from Trump’s home in Florida.

Republicans in Congress also defended Trump, some more aggressively than others.

Thursday, Attorney General Merrick Garland defended the FBI operationand noted, “I personally approved the decision to seek a search warrant in this matter.”

He added: “The department does not take this decision lightly.”

Republicans in Congress lashed out at the FBI after law enforcement seized classified documents kept at Trump’s Mar-a-Lago home.

In Cincinnati, a Trump supporter tried to infiltrate an FBI field office. He came armed with a nail gun and an assault rifle. After a standoff, he was killed in a shootout, a victim of apparent political anger that, over the course of the week, seemed to mount.

Trump said he was being attacked from all sides, meaning the FBI, but also the New York attorney general, who is investigating whether the Trump Organization promoted property values to obtain bank loans while lowering those same valuations to evade taxes.

In his statement on the matter, Trump invoked his Fifth Amendment right against self-incrimination hundreds of times, which he criticized during the 2016 campaign: “You see, the mob takes the Fifth. If you’re innocent, why do you accept the Fifth Amendment?”

Former President Donald Trump on his way to a deposition with New York Attorney General Letitia James for an investigation into the Trump Organization on August 10, 2022 in New York City. He defended the Fifth Amendment 440 times.

Another blow to Trump: A federal appeals court ruled against Democrats on the House Ways and Means Committee on Tuesday you can get your tax returnswhich for years he had tried to keep private. [In 2017 he stated, “I’m not releasing the tax returns because, as you know, they’re under audit.”]

Through it all, Trump remembered his own words and actions. In 2018 signed legislation that increased prison terms for mishandling classified information.

And even as Trump charged that America was turning into a banana republic, federal and state authorities said they were following the facts and the law in the service of the republic.

As Garland noted in his public statement Thursday, “Faithful adherence to the rule of law is a fundamental principle of the Department of Justice and of our democracy. Upholding the rule of law means applying the law uniformly without fear or favor.”

As Trump considers a bid to retake the White House, the nation pondered not only that possibility, but also that of a former president running again while under criminal investigation, or possibly indicted.

The story is produced by Arden Farhi and Anthony Laudato. Publisher: Joseph Frandino.