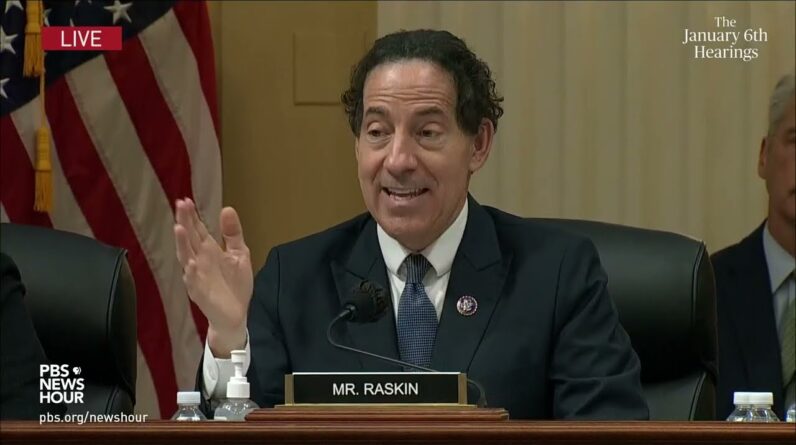 Rep. Jamie Raskin, D-Md., spoke on July 12 as the House committee investigating the Jan. 6 attack presented its findings to the public. The focus of the hearing was on extremist far-right groups like the Proud Boys and the Oath Keepers and the role they played in the Capitol insurrection.

Raskin introduced video testimony from former Attorney General Bill Barr, where he confirmed that he saw “absolutely zero basis” for allegations of election fraud made by Trump and his allies. Barr added that he clearly saw how these claims were influencing many members of the public to falsely believe that voting machines were not reliable, and that there was systemic corruption in the election system.

“I told them that it was crazy stuff, and they were wasting their time on that, and it was doing great, grave disservice to the country,” Barr said in recorded testimony.

Raskin also presented evidence that Trump and several allies drafted an executive order that would have directed the defense secretary to seize voting machines and allowed Trump to appoint a special counsel with the power to seize machines and charge people with crimes.

Former White House Counsel Pat Cipollone said during video testimony that he supported Barr’s conclusion that those claims of election fraud were false, and that he opposed the ideas proposed in the draft executive order.

“To have the federal government season voting machines? That’s a terrible idea. That’s not how we do things in the United States,” Cipollone said. “There’s no legal authority to do that.”

Raskin said “the startling conclusion is this: Even an agreed upon complete lack of evidence [of voter fraud] could not stop President Trump [and his allies] from trying to overturn the results of a free and fair election.