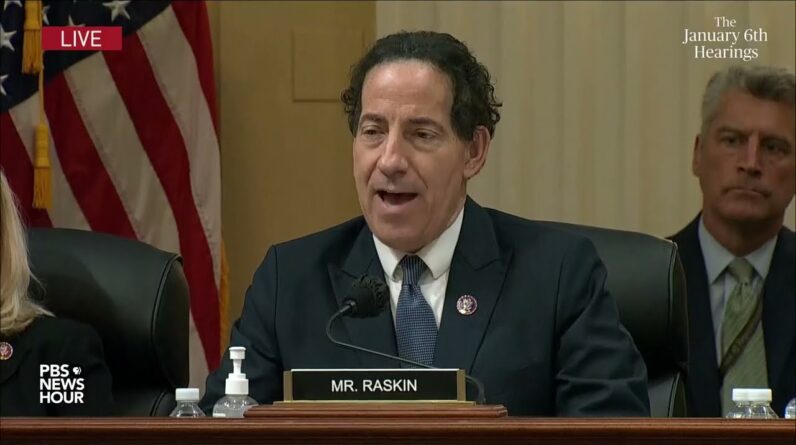 Rep. Jamie Raskin, D-Md. gave an opening statement on July 12 as the House committee investigating the Jan. 6 attack presented its findings to the public. The focus of the hearing was on extremist far-right groups like the Proud Boys and the Oath Keepers and the role they played in the Capitol insurrection.

Raskin spoke about the evidence that would be covered in Tuesday’s hearing. He said that no president in American history had ever “engaged in any effort to influence, delay or obstruct” Congress’s work in verifying an election.

Citing a late-night tweet from the former president, Raskin said Trump’s words “galvanized his supporters, especially the dangerous extremists in the Oath Keepers, the Proud Boys and other racist and white nationalist groups spoiling for a fight against the government.” Raskin added that three “interwoven” rings of attack came together on Jan. 6, 2021 that included the thousands of Trump supporters who traveled to Washington, D.C., for the “Stop the Steal” rally that day, members of domestic violent extremist groups who organized in the weeks leading up to it, and the former president himself, who sought to overturn the 2020 election.

“Many members of this crowd could be led to storm the Capitol, confront the vice president and Congress and try to overturn the 2020 election results,” Raskin said. “All of these efforts would converge and explode on January, the sixth.”