Home 24 Hour News Feed When will their churches condemn the Christian nationalism of MAGA politicians? 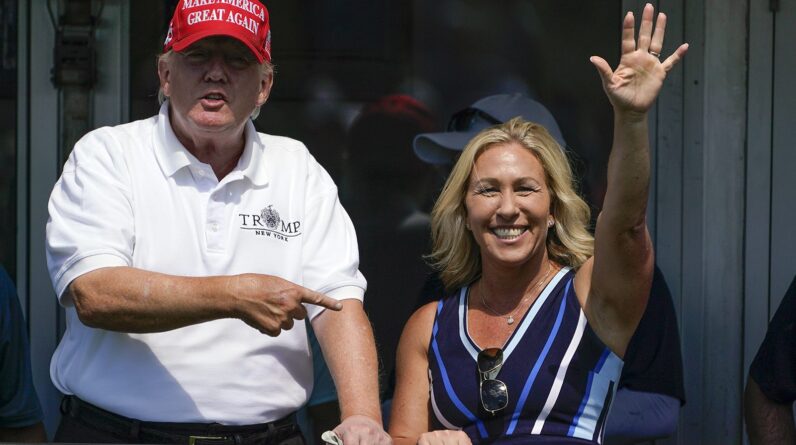 (RNS) – “He who would do good to another must do it with details.” This is a helpful and useful adage from the poet William Blake. It is also a deeply moral call to particularity in the attempt to do good, a call to specificity. Go granular or go home, he might say, because “Generalized good is the scoundrel’s plea, hypocrite. And flatterer”.

Generalization, in politics and religion, may work to accumulate credit, coins, clicks, and book sales, but particularity is where the righteousness, the great moral upliftment, lies.

In recent weeks, as elected officials who once tweeted “Back the Blue!” Now targeting federal law enforcement while also tweeting Bible verses, my mind wandered to some of the public agreements that make this publicly abusive behavior possible. Sure, there are political parties, donors, voters, but there are other institutions that are just as essential (if not more) to successfully winning and holding office. I am referring here to the churches. It’s time to think and talk more concretely about the behaviors they normalize.

After Rep. Marjorie Taylor Greene publicly called on her Republican colleagues to embrace Christian nationalism as their core value, the Religion News Service reached out to more than 50 Republicans in Congress for comment. Only two responded. This led me to three related questions.

Where were they radicalized?

Where were they catechized?

Where were they baptized?

I don’t think it’s at all reasonable to ask churches that claim (or once claimed) abusive elected officials as members what they owe both the public in terms of public safety and the members themselves in terms of moral clarity.

In my context, my two US senators (Marsha Blackburn of Christ Presbyterian Church and Bill Hagerty of St. George’s Episcopal) have used their government Twitter accounts to suggest that Attorney General Merrick Garland and our FBI are corrupt. When efforts to reach out to them and ask them to delete, retract and apologize for these incitements to violence fail, it is appropriate to ask their churches to offer a public statement condemning or at least distancing themselves from such behavior abusive? I think so.

I believe that church organizations that harbor repeatedly abusive public figures, especially those who have received public trust, have a responsibility to answer the question of where their testimony stops and that of the abuser begins. Otherwise, your organization only serves as free political capital for bad faith actors. And if Christian nationalism is a violation of the fundamental values ​​of the churches themselves, they owe it to their congregants, including celebrities, to say so loud and clear.

We’ve been here before. In Germany, the Barmen Declaration (1934) treated the Führer principle as heresy (as well as terror). In South Africa, the Belhar Confession (1982) addressed white supremacist ideology as sin. And more recently, the Council of Bishops of the African Methodist Episcopal Church issued an Episcopal Statement (2017) inviting “those committed to justice and righteousness, equality and truth” to assist them in the effort “to thwart that which is clearly demonic.” acts (of the Trump administration).”

These are not cases of churches suddenly becoming political. These are cases of baptismal communities that demonstrate moral courage, making their testimony clear in the face of state violence. Church organizations in America owe it to the American public to hold their publicly abusive congregants to standards of basic moral seriousness, especially in our season of insurrection, whispers of civil war, and the strategic erosion of every form of common public good. .

Rep. Marjorie Taylor Greene, R-Ga., waves as former President Donald Trump points to her as they watch the 16th tee during the second round of the Bedminster Invitational LIV golf tournament in Bedminster, N.J., July 30, 2022. (AP) Photo/Seth Wenig, file)

In the case of Marjorie Taylor Greene, we have an elected official who spreads endless forms of misinformation and who was also baptized at the North Point Community Church in 2011. Most interestingly, North Point Pastor Andy Stanley he has been outspoken about Christian nationalism and polarization (see his most recent book Nothing Divides Like Politics). If baptism is to have meaning as a moral or communal commitment, I think North Point would be right to draw a line between what its public testimony is and should be and the violent antics of Marjorie Taylor Greene.

That’s not to say North Point has a Marjorie Taylor Greene problem. I mean Greene, like Blackburn and Hagerty and other elected officials who collaborate with the Big Lie, have a problem with the church. They have been encouraged to believe that they are part of a moral community. But if, in fact, their churches have given them a free pass to terrorize, I’d say they haven’t been properly catechized yet. Like their constituents, they have been badly served.

“Aren’t religion and politics the same thing?” It is Blake again, defying, as poets and prophets do, the prevailing dichotomies. In our discourse, there is a bit of a firewall between “faith” and “politics” that makes it hard to remember that Mitch McConnell is a Southern Baptist and Al Gore is a Christian. It’s easy to fall into these divisions. It is also the case that these divisions often obscure the threats, as well as the fair possibilities, before us.

Sometimes the free-for-all that is Twitter can focus a conversation and facilitate insights that are easy to miss when we try to limit public behavior (and public abuse) to specific lanes we understand. Here is attorney and special educator Anna Caudill weighing in on the question of whether or not churches should talk about notoriously insurrectionary congregants: “How hard is it for a tax-exempt corporation to distance itself from the publicly destructive behavior of a member bent on dismantling our system of government?”

Is it so difficult for a tax-exempt corporation to distance itself from the publicly destructive behavior of a member bent on dismantling our system of government?

It’s an amazing way to frame the story. It is also rhetorically impregnable. An American church organization is an arrangement within and in relation to other arrangements that make up cities, states, and the entire American culture. In the heady days ahead, we need to think more and perhaps speak more frankly about what we are enforcing, what we are normalizing, in these agreements. We become what we normalize.

(David Dark is the author of several books, including America’s Chance: How the Gospel Can Repair Our God-Blessed, God-Forsaken Land. He is a professor at the Tennessee Prison for Women and at Belmont University. The views expressed in this commentary do not necessarily reflect those of Religion News Service.)